This is Gertrude, my Parkzone Radian glider, purchased at HobbyTown USA. Gertrude was my second plane and remains one of my favorites with no major repairs or replacements needed in over a year of flying. (Until recently.) 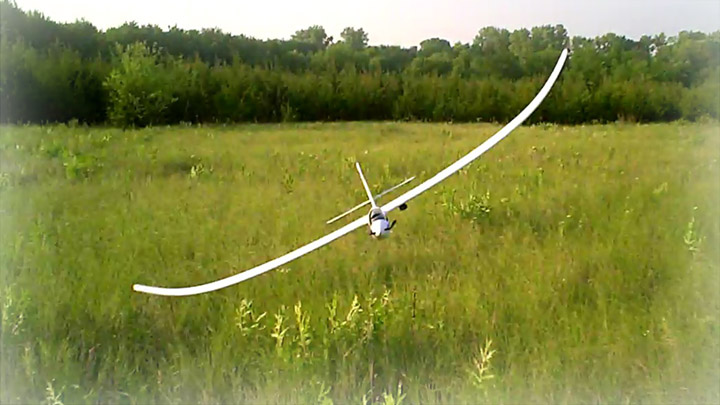 I often fly Gertrude with a small ‘keychain camera‘ attached to her wing, to capture in-flight videos.

Gertrude is bone stock, right down to the flight batteries. But, after some success with my first night flier, I have recently added multi-colored LED light strips to Gertrude, turning her into a night glider.

The bottom is red(wing), blue(wing) and yellow(fuselage). The yellow is actually a strip of white with yellow packing tape over it.

The top is white with a red or blue tip (wing), white (fuselage) and a short strip of red and blue up the sides of the vertical stab.

Everything’s wired up with some telephone wire, attached via the adhesive backing on the lights and/or packing tape.

The wings unplug via some little mini plugs:

Everything is plugged into the balance plug of the flight battery. You’ll find the wiring diagram, a photo of the setup, and a video of the plane in flight, below. 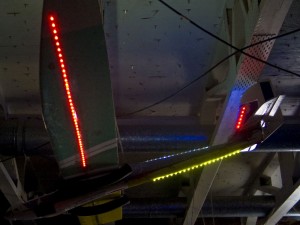 This entry was posted in My Fleet, My Planes, Night Flying, R/C Planes. Bookmark the permalink.