Glider Down – the crash of the Night Radian

Well, Getrude had her first major crash today. It was pitch dark – 11PM – to boot.

I was night flying my Radian from my usual pitch black field in the middle of nowhere. I was climbing out after launch and had about reached altitude when the plane just went wild – looping and spinning. I seemed to have a tiny bit of influence but no real control.

It came down in a ditch on the far side of an intersection from us. Fortunately, the night lights stayed on the whole time so it was relatively easy to follow and find. And also fortunately it didn’t land right in the middle of the road and get crushed.

As I walked up to the plane, I tried the controls and they seemed to be working just fine. The nose was missing – no cowling or propeller or motor. I looked all around the crash site without finding them.

I eventually pieced together that the motor came off the plane, not in the crash, but in flight and was, itself, the cause of the crash. I actually found the canopy sitting on the side of the road, about half-way between the launch site and the ‘landing’ site.

Now it looks like I need a motor, propeller, motor mount and probably a fuselage. 🙁 At that price, I’m probably better off just buying a new PNP Radian and getting a new wing, servos and etc. in the bargain.

Read about the rebuild, here. 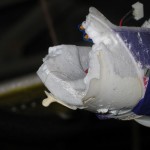 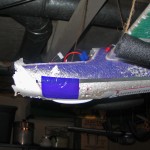 This entry was posted in Crashes, My Planes, Night Flying, R/C Planes. Bookmark the permalink.

One Response to Glider Down – the crash of the Night Radian