I wanted to play with gyro stabilization, but I didn’t want to spend a lot of money or do a lot of thinking. A little internet research indicated that the cheapest useful gyro was probably the  Detrum GY48V piezo headlock gyro, available for around $20. So I bought one.

My newly built Phoenix flying wing seemed like the perfect test platform. I decided to try and stabilize the roll axis with a gyro and see if I could improve it’s handling in insane winds.

Further reading suggested that I really needed a mixer of some sort, to take the output of the gyro and send it to both elevons. Worse, some mixers apparently work with some gyros and not others. Setting things up looked complicated.

I decided to skip all of that. I would only hook the gyro up to one elevon – the starboard elevon – and see if that worked.

The Phoenix is built from the wings of a crashed Stryker. The old servo pockets are still there, but I had to cut new pockets for the servos for the new wings. The old servo pockets are right near the wing’s center of gravity, so they seemed the perfect place to stuff the gyro, which just barely fit in there. Some blocks of foam to improve the fit and packing tape over the top and bottom and the gyro was secured in place. That’s the servo sticking up in the center of the photo – the top part of a black box. The bottom of the servo sits flush with the bottom of the wing. 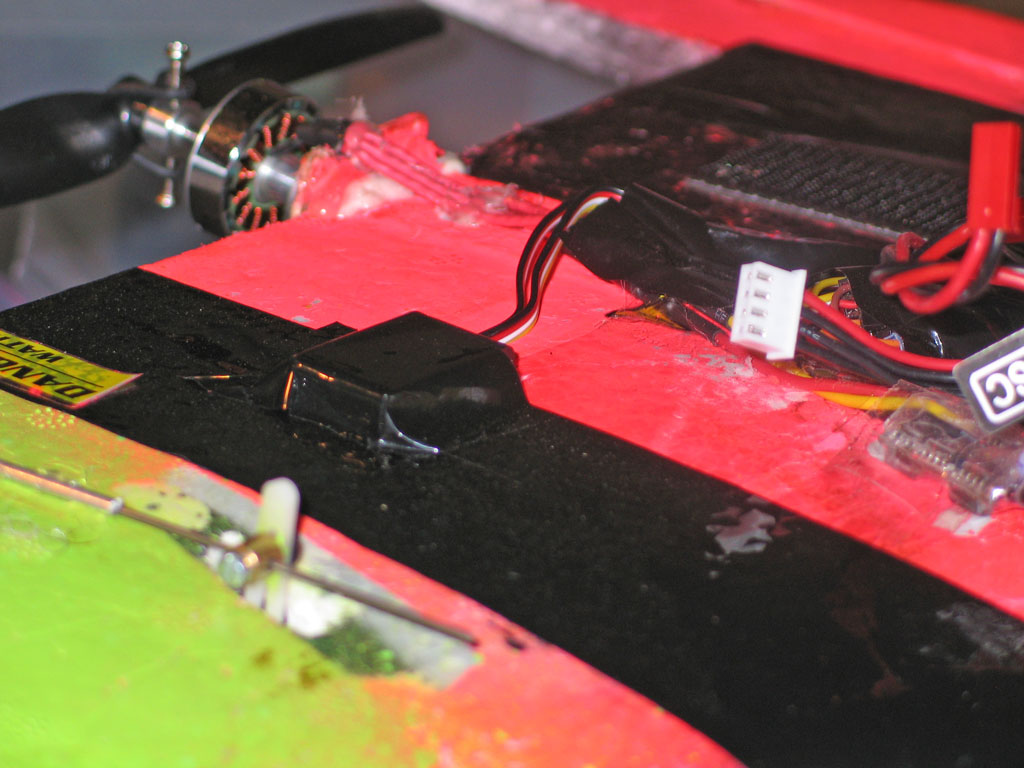 Next came programming. Setting up the GY48V is actually pretty easy, once you figure out what you need to do.

The trick with the DX7 is that the landing gear travel is on a second, hidden page of travel settings. It took me about a day to find that.

The GY48V chatters at anything above 20% gain, on this plane at least. I’m coming to suspect that this actually generates more elevon movement than is good for me, as the wing tends to bounce up and down quite a bit in high winds.

It could be I could solve this by twisting those little dials on the gyro, itself but, honestly, I don’t understand what those do.

Here’s some video from a recent test flight in unsane winds.

This entry was posted in Flying Wings, Gyros, My Planes, R/C Planes. Bookmark the permalink.