My big flying wing, the Papa Divine, proved a difficult beast to get dialed in but, much experimentation and a complete tear-down and rebuild seem to have solved its problems. That’s good because the first few flights ended nose-first in the dirt.

The plane was initially nose heavy, requiring a lot of up elevator (‘reflex’) to maintain level flight. In addition – and this is something I *should* have learned from my M-226 flying wing project – fat airfoils on a flying wing require a lot of up reflex to fly.

Next, the underpowered 8 gram servos – EMax ESO8A’s. Personally, I think these – combined with the excessive amounts of up reflex required – were the prime villain in the plane’s fatal “dive when going fast” behavior. I suspect that, as the plane went faster, air pressure increased on the raised elevons, eventually overpowering the little EMax servos. As the wind forced the elevons down, the plane would begin to dive. As it dove, it would pick up speed. When it picked up speed, the pressure on the elevons would increase, pushing them further down and creating a terrible feedback loop of death.

Finally, the airfoil itself was too fat and entirely the wrong shape.

First, I fixed all the non-airfoil problems by upgrading the servos to 25gram Power Up AS3513NG’s (stall torque: 3.5 kg/cm, about 2.3 times that of the original servos).

I also kept pushing the CG back, which helped balance the plane and remove some of the up reflex.

Eventually I got in some pretty decent flights.

Convinced that I understood the problem, I ripped the plane completely apart, pulling off all the electronics, the elevons, and a few bits of carbon fiber.

I built a new version of the wing using my best approximation of the MH-60 airfoil. (With my build method and lack of dexterity, it’ll be an approximation at best.) It’s visibly thinner than the original. I installed all the electronics and taped on the elevons and I was ready to go with the Mark II. 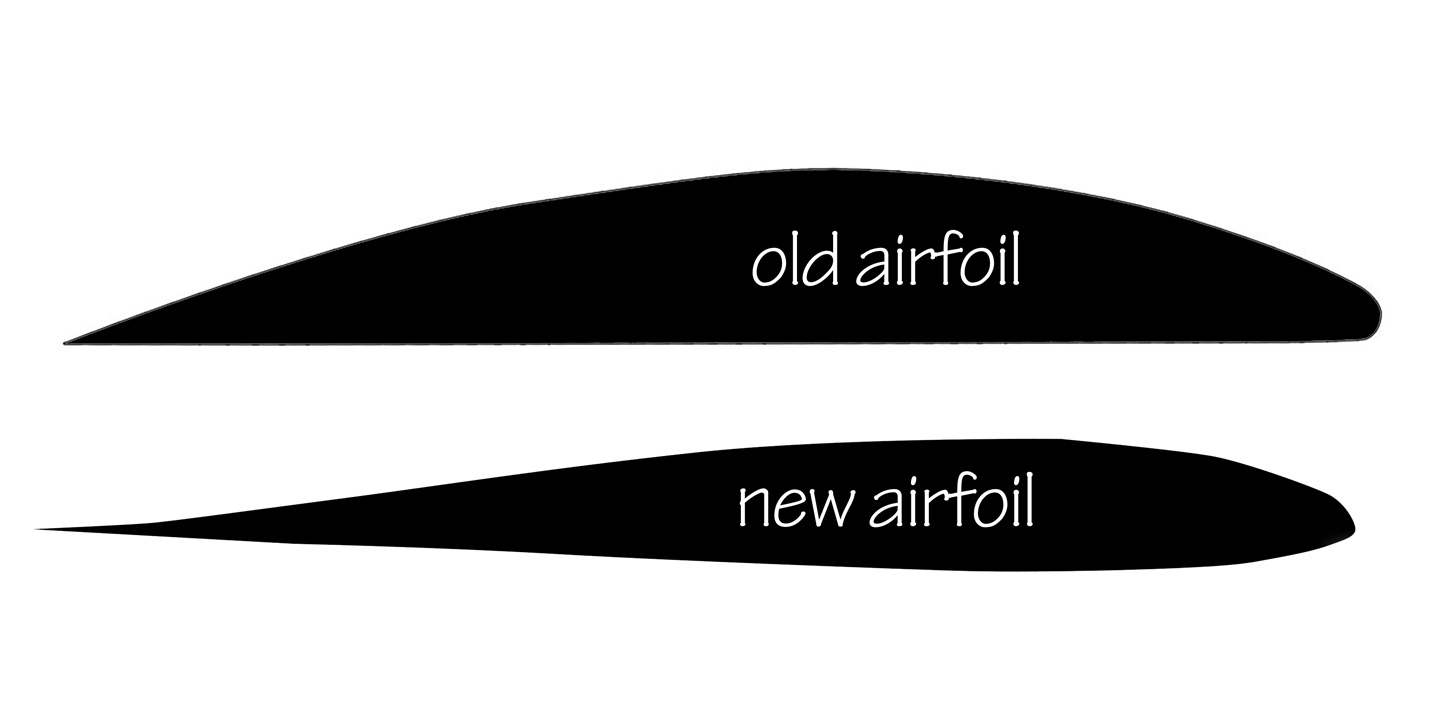 According to my notes, the new plane is 150 grams lighter than the original but I’m suspicious of this. I don’t see where I could have saved that much weight. Still, with an AUW of 682 grams (24 ounces), it has a wing loading of around 1.8 grams per square inch. And it flies pretty alright.

Thanks to everyone on RCGroups and WattFlyer who helped me to puzzle out this mystery.